The Olmos Ensemble kicks off its season with a bang

Artistic Director Mark Ackerman founded the Olmos Ensemble in 1994 and is comprised of musicians from the San Antonio Symphony alongside New York based pianist Warren Jones and other guests.

The evening’s program opened with Karl Reinecke’s Sonata “Undine” for flute and piano performed by Warren Jones and Marianne Gedigian, a professor of flute at University of Texas at Austin Butler School of Music and a former performer with the Boston Symphony Orchestra. The sonata is a character piece composed with the theme of romance throughout. 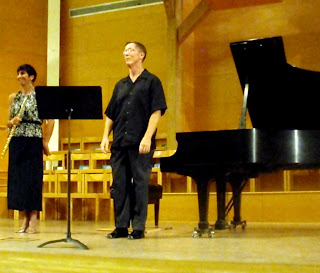 From her virtuosic playing to her silver stilettos and brilliant gold flute, Gedigian put on an all-around gorgeous performance. Her round, expressive tone during melodic sections of the piece swept the audience away in a blissful reverie, while her intense attack during fast, technical passages showcased her talented precision. Much like a rock band’s guitarist shredding lightning-speed solos, Gedigian’s execution of the most technically difficult parts of the piece sounded effortless and full of character.

Next on the evening’s set was Frances Poulenc’s Sonata for oboe and piano featuring Mark Ackerman and Warren Jones. Dedicated in memory Serge Prokofiev, this sonata was Poulenc’s last major work composed in the summer of 1962. Emotion emanated from the performers from the start of the piece as they passed the tender, recurring melodic line back and forth. Torment and sadness was expressed through the silent pauses coupled with thunderous dissonant chords and reinforced by the eerie, irresolute ending. Poulenc maintains his sense humor with the unpredictability of the piece. The sonata was full of very sudden changes between singing melodic lines and pounding dissonance executed seamlessly by Ackerman and Jones.

Samuel Barber’s Summer Music brought clarinetist Ilya Shterenberg, bassoonist Sharon Kuster and French horn player Jeff Garza to the stage, alongside both Gedigian and Ackerman. This one-movement piece opened immediately with interesting combinations in instrumental timbres. The horn and the bassoon provided the harmony, while the clarinet, oboe and flute provided dancing, frenetic melodic lines in the high register. The piece contained dramatic changes between poignant melodies and complex polyphonic passages. The five musicians not only found a perfect balance within the texture of ensemble, but they also expertly melded polyphonic parts together to form a unified musical idea. 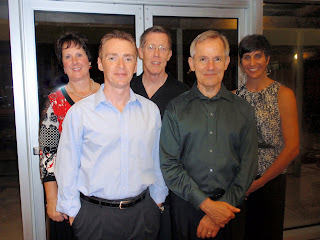 The evening concluded with W.A. Mozart’s Quintet in E-flat. The piece shone the spotlight on Warren Jones while the wind instruments often played a supporting role, especially in the first movement. The opening was full of celebratory, regal-sounding rhythmic patterns and virtuosic piano passages. The wind instruments took a more leading role in the Larghetto, which contained beautifully phrased, long melodic lines. The finale explores every possible instrumental combination within the ensemble as the melody bounces from instrument to instrument with various duets and trios in between.
The seemingly random combination of instruments (oboe, clarinet, bassoon, horn, and piano) shows off the ingenuity and creativity of Mozart as well as the ability of the musicians to blend and balance with one another despite the differing timbres of their instruments.

The unique program and the high level of musicianship made for an exceptional performance Monday evening. Look out for upcoming performances this season by the Olmos ensemble, including their November 7 show titled “Variety! Winds and Strings, Thoughtful and Humorous” and their January appearance in the Beethoven Festival. For more information about the Olmos Ensemble, visit http://olmosensemble.org/.
Posted by Your Classical Oasis at 12:00 PM