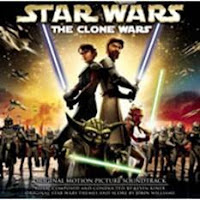 As the approach of the opening of the movie Star Wars: Clone Wars this Friday, I listened with interest to the new soundtrack, featuring the City of Prague Philharmonic with composer Kevin Kiner conducting.
It's a must for all Star Wars fans, but not necessarily movie buffs. The new soundtrack is based on themes from John Williams, and is skillfully handled by Kiner. Cues are short, and sometimes memorable. There is also a lot of variety, both with orchestrations (electric guitar, erhu and electronics) and in drama. Throughout the score there is lots of rhythmic propulsion,
I think for the upcoming television show, Kiner's music will be far above anything on the small screen, but I'm not convinced how it will play on the silver screen.
For the radio and cd player it seems fine!
John Clare, KPAC host
Listen to excerpts and purchase it here at Amazon.com (and benefit Texas Public Radio.)
Posted by Your Classical Oasis at 7:30 AM
Labels: clone wars, john williams, kevin kiner, new release, review, star wars

Man I haven't even seen this movie yet, and the soundtrack is already out! Sweet :D

Too bad the movie can't match up!