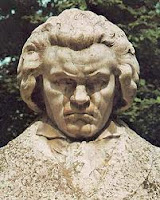 Ludwig van Beethoven was of two minds when it came to music, on one hand he was the great Architect and the greatest living practioner of sonata form; the rules of the music game in his time. On the other hand no one would break these same rules with such abandon.

Nicolai Medtner won the great gold medal in piano performance and could have easily made a living playing other people's music, but creativity and the freedom of composition was his driving emotion and in pursuit of this happiness an impoverished life was his!

Two musicians that had to follow their hearts no matter what. Hear their musical experiments on the Piano this Sunday afternoon at 5 on KPAC and KTXI.

host, Randy Anderson
Posted by Your Classical Oasis at 10:06 AM