It is commonplace to imagine Georges Bizet's Carmen to be part of a long line of seductresses: Salome, Manon, Delilah and most notoriously Lulu. Her goal, apparently is, escape from jail and win her freedom - the price? The seduction of Don Jose. What follows is the inevitable. It is a convenient explanation, especially for Don Jose and for all men who think themselves victims of the wily and duplicitous female who had undermined, betrayed and lied. In short it is subterfuge that drives them and for all of the women above, excepting Carmen, I accept that this is true. Salome is an unsupervised teenager bent on pathological narcissicism (Herod and the court have not a clue where her mania is leading ...). Manon is  naive, but also in search of a protector; Lulu pretends to be a naive as she realizes men desire this and she plays the role to win her desires; Dalilah works for Samson's enemies and is the classic "spy in the house of love". Carmen does none of this and none of these women offer over and over to not only release their victim, but Carmen encourages his realization that he has made a mistake! She promises love and delivers; but she never offered "terms" or a limit to her feelings; that is his presumption  and part of his unspoken dream.
The text of the opera is both brilliant and clear: 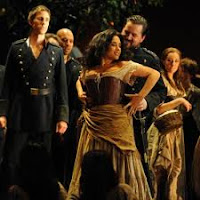 O ma Carmen, laisse- moi te sauver, toi que j'adore,
Oh my Carmen , let me save you,
Oh, Carmen I adore you...
Her response (already given to save his pleading and her bother) is devastating  and utterly without equivocation or deceit :
Tu demandes l'impossible !
Carmen jamais n'a menti !
Entre nous, tout a fini !
You are asking the impossible !
Carmen has never told you a lie !
All is over between us !
All reponses are in exclamation points. In each act Don Jose, a soldier and a free man, is offered a choice. He may have Carmen, but it will cost him and change his life forever. In act two when she rejects the Toreador, she too is free and for the moment loves Don Jose alone. In act three realizing that for all their efforts and feeling, " this life is not for you " she then encourages him to return home with her rival, Micaela and in the last act she will not turn away from this truth even under the premonition of death as has been read in the cards by the gypsies. What then is it about Carmen that has so entranced him?  It is the thing never said in the opera - Carmen is the "bad girl of good boy's dreams" and mother's nightmares. She is the opportunity to turn his back on Mother, Home, Innocence and Obligation. She is the temptation and reality of another world of Freedom, Moral Trespass, Risk and Sensuality. Don Jose's fatal delusion, typical of a man of his time, is that in the end he will tame and reshape her: after all she is only a woman. It is this failure (the failure of an unspoken dream) that drives him to insanity and finally murder. She will be his or no one's, he can never offer her: "the freedom " that she had over and over offered him. This is the opera's great secret and unconfessed power and about as far from seduction as I think possible. The shattering conclusion is all the more horrific in that it is not only not deserved, but is wholly unnecessary. That Don Jose can neither lead Carmen's life nor return to his past in the end he is too dependent and would rather murder than be free. This is perhaps Bizet's most devastating insight, of a dream gone wrong and perfectly realized as music, the inversion of romantic opera ! Or (to paraphrase) as Nietzsche later wrote to Wagner : "Richard , love is not like Tristan. Love is like Carmen " 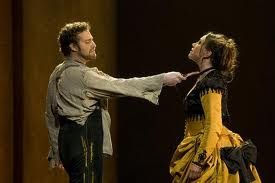 Tune in to Saturday Afternoon at the Opera and hear Don Jose's emotional and one way ride to hell, courtesy of a tempestous woman and Bizet's extraordinary music and drama that gives shape to this unique and colorful creation. That's Bizet's Carmen , this Saturday at noon, on KPAC and KTXI .
By Ron Moore
Posted by Your Classical Oasis at 10:14 AM