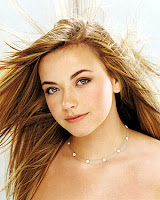 From the Hampshire Chronicle:
Charlotte Church (left) decided to return to the spotlight after realising she had made a habit of stealing the mic in karaoke bars.
The 24-year-old has been enjoying a quiet life with rugby player Gavin Henson and their two children - Ruby, two, and 10-month-old Dexter - but is returning to the limelight by bringing out an album and judging Somewhere Over The Rainbow.
She told The Guardian: "I'd just been at home child-rearing etc and I knew I wanted to get back into music - I missed singing."
She added: "Every time we'd go out I'd end up in a karaoke bar and I'd completely steal the mic ... I thought, it's getting a little low rent Charl, come on now, you should probably do this again professionally.
"We're pretty cushty little hermits in Wales. So I was like, 'Shall I do this album, shall I do this show? Do I really want to be back in the public eye?' But then I decided, 'B****r it, I've gotta sing.'"
Charlotte has been working on her new album and feels it's a big improvement on her Crazy Chick pop debut.
She said: "I've been songwriting a lot recently, because I had stuff to say and because there's a little part of me that wants to be a poet, but also because nobody really writes songs for my range.
"When I listen back to ... Tissues And Issues, that was kind of my first try at writing, and I think ahhh! So little! And I might think that of this album in 10 years' time. But I don't think so. I think it's a hell of a lot better."
Posted by Your Classical Oasis at 10:51 AM