From the Seattle Times:
Gerard Schwarz to step down from Symphony
By Seattle Times staff
After more than two decades at the helm of Seattle Symphony Orchestra, Gerard Schwarz announced today that he will step down when his contract expires in 2011.
Schwarz, 61, is among the longest-tenured musical directors in America and has been a towering figure on the Seattle arts scene during a period of unprecedented growth.
Upon his departure, he will be named Conductor Laureate and retain occasional conducting duties.
"As we celebrate the 10th anniversary of our magnificent Benaroya Hall and our extraordinary artistic accomplishments, I believe it is a fitting time to relinquish my Music Director responsibilities of this orchestra," Schwarz said in a prepared statement. "With my new position, I will be afforded the opportunity to continue a relationship with this fine orchestra and focus on the music making I love so dearly."
Schwarz is widely credited with realizing the construction of Benaroya Hall and raising the quality of the orchestra to a world-class level. He introduced the symphony to the classical-music elite at New York's Carnegie Hall in 2004.
Under his leadership, the symphony's subscription audience has grown from 5,000 to 35,000 and its annual budget has risen from $5 million to $22 million. The orchestra has made 125 recordings under his baton — 11 of which have scored Grammy nominations. Last year, it won an Emmy for the self-produced TV special, "Seattle Symphony From Benaroya Hall."
The maestro's long reign has also been marked by some controversy.
His professional break with longtime concertmaster Ilkka Talvi in 2004 turned nasty when Talvi attacked Schwarz publicly on a blog. The incident was ultimately resolved through mediation.
The subsequent hunt for a replacement concertmaster — an important leadership position in any orchestra — was drawn out for three years, and only temporarily resolved when Schwarz decided to install four concertmasters on a rotating schedule. The plan didn't pass muster with the players' union, and earlier this year Maria Larionoff was named sole concertmaster.
Meanwhile, violinist Peter Kaman sued the orchestra in 2006, saying that Schwarz harassed and discriminated against him on the basis of a disability. The case was dismissed by King County Superior Court in January of this year.
Internecine conflict is common in any symphony orchestra, however, and Schwarz will likely be remembered for successfully leading Seattle Symphony through difficult financial times.
The orchestra board will now begin the search for his replacement, a process that could take years. Board chair Susan Hutchison stated, "We are grateful to Gerard Schwarz for building the reputation of the Seattle Symphony. The Board is confident that the legacy Maestro Schwarz has created will give us the leverage we need to attract a stellar Music Director. The transition committee is delighted to have three seasons in which to introduce a number of qualified candidates to Seattle." 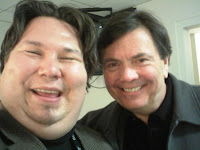 Left is Host John Clare and Schwarz in Philadelphia. Hear a portion of their interview here.
Posted by Your Classical Oasis at 4:38 PM
Labels: gerard schwarz, seattle