Just in from CCSA: 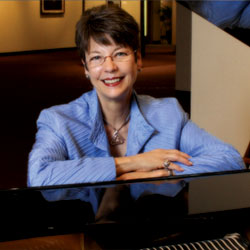 The Children’s Chorus of San Antonio announced today that Founder and Artistic Director Marguerite McCormick will retire in May, 2014 after thirty years of dedicated service to the organization. The CCSA will celebrate its 30th Anniversary in 2013-2014 with a series of special events in addition to their full concert season. In preparation for McCormick’s retirement, the CCSA will implement a series of strategic actions over the next two years to strengthen membership and ensure the organization is meeting the needs of the community. McCormick chose to make the announcement now so as to guarantee a successful transition. “It is vitally important that there is continuity in the program” she remarked, “and that the transition is healthy and positive for our young artists, their families and the organization as a whole.” McCormick will leave a long legacy of service to young people in San Antonio, starting with founding the CCSA with 33 singers in 1983. During her tenure, singers have travelled around the country and around the globe and have made their mark on the San Antonio community. Performance milestones include several premieres, recordings and a fully staged baroque opera. The program has also blossomed into a multi-faceted organization with six performing ensembles, two neighborhood community programs and ten early-childhood classes serving almost 400 young people annually. The 30th Anniversary season will include a recital of alumni who are now professional singers, special performances and a grand celebration in fitting tribute to their Founder. McCormick remarked “Exciting events are in the planning stages for 2013-2014, our 30th Anniversary Season. It will be a wonderful celebration of singers past and present and will provide opportunities for our audiences to enjoy the best of CCSA. This season offers a fitting close to my leadership of the Children’s Chorus.” To prepare for transition, the CCSA will implement a series of strategic actions over the next two years and ensure its programs are healthy and ready for new leadership. The CCSA has recently received a generous grant from the Lila G. and Vesey F. Taylor Fund of the San Antonio Area Foundation to jump-start the process. The organization will start by conducting a series of focus groups with a broad cross-section of the community to facilitate discussion, gather data and gain valuable insight into their perception of the CCSA and the role of music in the lives of their children and students. “The San Antonio Area Foundation has made a commitment to strengthen nonprofit organizations,” said Sandie Palomo-Gonzalez, the Area Foundation’s assistant vice president of grants and programs. “We are pleased that this grant to the Children’s Chorus of San Antonio will help build a strong future for their organization while supporting arts in our community.”
Posted by Your Classical Oasis at 5:17 PM