"There are not many composers in the modern world who possess the lucky combination of writing music of substance and at the same time exercising an immediate appeal to mixed audiences. Zwilich offers this happy combination of purely technical excellence and a distinct power of communication." 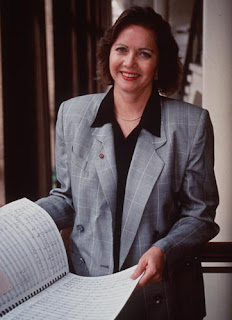 Ellen Taaffe Zwilich, is widely considered to be one of America's leading composers. She studied at the Florida State University and the Juilliard School, where her major teachers were Roger Sessions and Elliott Carter. She also studied violin with Richard Burgin and Ivan Galamian and was a member of the American Symphony Orchestra under Leopold Stokowski.
Zwilich is the recipient of numerous prizes and honors, including the 1983 Pulitzer Prize in Music (the first woman ever to receive this coveted award). She was elected to the Florida Artists Hall of Fame and the American Academy of Arts and Letters and, in 1995, was named to the first Composer's Chair in the history of Carnegie Hall. Musical America designated her the 1999 Composer of the Year. A prolific composer in all media except opera, Zwilich has produced four symphonies and other orchestral essays, numerous concertos for a wide variety of solo instruments, and a sizable canon of chamber and recital pieces. Her works are commissioned and played regularly by the leading orchestras and ensembles throughout the world.
Zwilich marked the beginning of her 70th birthday season – featuring two major premieres, recordings, and performances of her work across the country – with the world premiere of Symphony No. 5, commissioned by the Juilliard School, and performed October 27, 2008, by the Juilliard Orchestra conducted by James Conlon at Carnegie Hall, New York, NY. The new symphony’s premiere launched a season that concluded with the world premiere of another major work, the Septet for Piano Trio and String Quartet, performed by the Kalichstein-Laredo-Robinson Trio and the Miami String Quartet. In addition, a disc of three of Zwilich’s works performed by artists from the Chamber Music Society of Lincoln Center was released by Koch Records, the Claremont Trio is released a new disc titled American Trios which will include Zwilich’s Piano Trio, and a half-hour television program of her work Peanuts Gallery, which has been broadcast over local PBS stations nationwide almost 700 times, recently received an award from the National Educational Telecommunications Association.

Host John Clare spoke to Zwilich at her home in Riverdale, NY about composition, awards and creativity.
Listen to the interview in two parts:
Part 1 [mp3 file]
Part 2 [mp3 file]

You might also enjoy this selection of the Boston Trio: