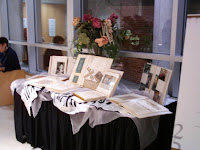 The San Antonio International Piano Competition got underway today at Ruth Taylor Recital Hall on the Trinity University campus. Five semifinalists performed today and four will perform tomorrow (one contestant canceled last Friday due to illness and there wasn't time to alert an alternate) starting at 2pm.
Programs today had Chopin (three pianists chose his works, including an all Chopin recital of the Ballades plus the Rondo, opus 16), Debussy, Scriabin, Brahms, Barber, Ginastera, Haydn, Granados and Bach-Busoni.
Tomorrow it begins at 2pm-5pm, returning at 7:30pm; and the five finalists will be announced around 9pm. They'll perform in the finals starting Friday afternoon at 2pm, again at Ruth Taylor Recital Hall. 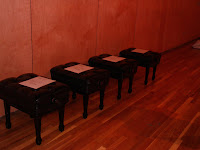 Attendance was good for this round, and more are expected over the next few days.
Host John Clare spoke with president Anne Johnson about today: mp3 file
Clare also spoke with vice president Deborah Moore about the competition: mp3 file
Each contestant also has their own bench (shown left) that is adjusted to their height. Evidently one was quite squeaky during today's round!
Posted by Your Classical Oasis at 11:48 PM
Labels: saipc, San Antonio, the piano

both MP3 file links on this post do not work